By Margot Saher and Lou Callard

Take some of the ‘finest’ brains in the country. Put them on a state-of-the-art research vessel which is filled to the brim with geophysical equipment, and has its own core scanning lab. Imagine what one could do with that! And what do we do with it? What is the scientific treasure we hunt? Mud. Six weeks at sea for mud (occasionally sand…)? We’ll be scrutinising it for years to come! Without mud the whole endeavour would be a failure; the mud must be treasured, cared for. It is the sedimentary archive that could answer the question of when and how the British-Irish Ice Sheet vanished. It is the wet lab coring teams that handle, care for and love the mud. There are two shifts: the Night-watch from midnight to noon, and the Day-team from noon to midnight. Whilst in the lab and, more importantly, out on deck, these have to wear armour: PPE (Personnel Protective Equipment) – a hard hat, hobnailed boots and some rather unflattering (generally oversized) overalls. The overalls are optional, but a sensible option at that; the job is a messy one, so unless you have an endless supply of clothes…. As the British Geological Survey (BGS) core team recover the mud to deck we have to wait – impatiently. How much have we recovered, and is it the right stuff? Even before the barrel is laid down we swarm expectantly around its end to get the first glimpse (and touch) of the treasure. The strength of the mud gives us so much information; we prod it, taste it…. Does it feel like silt, sand, clay; is it stiffened, reflecting the weight of former ice sheet bearing down on it? We recover everything from the core shoe, the core catcher; whatever sticks or falls out of the liner gets bagged, labelled, photographed and stored cool. But what is inside the liner is what we really want, it contains the story of the ice coming and going from the waters around these islands. 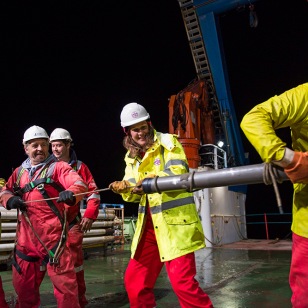 The liners are not easily released from the barrel; muscles are needed to get it out, and a tug-of-war ensues of scientists, BGS engineers, crew, random passers-by, anyone versus the barrel. But once the liner is out, it’s ours. The muds we desire are only useful if we know exactly where they are from, so labelling is everything. Every single core section has its own unique label, which will end up on its liner, caps, wrapping material, and the box it’s stored in. There are yellow caps for the tops and black for the base of each segment; which way is up matters! And that is only the beginning; there is no such thing as over-labelling, and that holds for cores sections, record sheets, scanned records, spreadsheets, photographs……

Lou: “The day shift consists of Steve, Zoe, Catriona, Kevin and me. Whilst Colm and Katrien spend the day planning where we will core next, we collect and process the cores. Generally our day starts at 11:20 with breakfast, which also happens to be lunch for the other crew members. Breakfast can be anything from a curry to fish and chips. Today’s option was Thai fish cakes, with noodles and sweet chilli sauce. Although having such a large meal first thing was rather odd to begin with, six weeks in it seems quite normal and a bowl of cereal would now disappoint. Shift begins with the midday handover meeting and our goodnights to the night team.

Then work begins! We spend most of our shift either out on deck collecting and cutting the cores, or in the wet lab splitting, logging and packing the cores away with a constant dual stream of material either from the deep or from the MSCL cave. Frequently we split over 20 sections during our shift, and often it’s more than 25. Each section is 1 m long with each 1 m weighing between 10-12 kg, so after 12 hours of carrying, splitting, logging and packing it is a good workout. So the coring job may seem rather unglamorous and exceptionally mucky, and involves hard manual labour; it is also an exciting and rewarding part of the cruise. The sub-bottom profiles and bathymetry data provides a tantalising look at what might lie beneath, but it is only when the core is taken and the material viewed that you know whether or not we have captured the right material needed for the project, and whether there is something we can use for dating. Sometimes we are disappointed normally if we fail to guess correctly in the ‘guess-the-core-length’ sweepstake (Steve is slightly in the lead at the moment), but when a good core is opened, it changes the mood of everyone involved.

Our work still isn’t quite complete, cleaning and maintaining the lab ready for the night team, labelling, cropping and archiving all photographs, and Zoe dutifully scans all of the deck sheets. At midnight the night team relieves us and then we head either straight to bed or take a detour past the kitchen to get a post shift snack. A day shift favourite is Nutella (somewhere in the multi-verse other nutty spreads might exist) on toast. It is hungry work, coring!”

Margot: “the Nightwatch consists of Kasper, Riccardo, Jenny, myself and occasionally Richard (if he can drag himself away from the Geophysics, picking core sites and mostly chatting on deck). As we start our shift, we tend to find ourselves in the middle of a coring transect that has been planned before, so we of the night often start our shift on station, vibrocoring. We’ve discovered that Riccardo has a special talent for working hard but still staying clean, while Richard has the useful talent for removing almost any sediment from an unwilling core catcher. Kasper’s Danish (or Viking) muscles come in handy for removing the liner from the barrel, and Jenny has useful BGS contacts (which saves us, for instance, from running out of sample bags). I myself have developed the modest knack of writing upside down, for liner labelling purposes.

Splitting and description has to wait until we receive cores from Elke and the core scanner cave, and she works 6AM to 6PM. The early part of the shift can be quite calm, if the core stations we have picked are far apart. Quite often nature festoons such a quiet early part of the shift with an amazing sunrise. The pace picks up dramatically as the cores start to emerge from the MSCL cave. It can get a bit hectic if we’re busily splitting and describing, interrupted by receiving new cores from the seabed. Core sections everywhere! But the splitting is exciting, as we get to see the whole sedimentary sequence for the first time. Do we have the ideal core, which consists of a subglacial till at the bottom, conformably overlain by marine sediments deposited after the ice retreated? Are there perhaps some nice shells in it for radiocarbon dating? When we see something we could use for 14C dating, we take it out. As we are coring, we have a competition running: guess the core length. It is very tight at the moment; Riccardo is in the lead, closely followed by Jenny, and Richard is trailing miles behind, but it all can still change, even with only two days to go. Eventually noon arrives, when we hand over to the day team, and then plonk down tiredly for lunch, which, for us, is more like late supper. After lunch and a cup of tea it’s bedtime! And then at around 11PM (ish) we get up again, and the sequence repeats.” 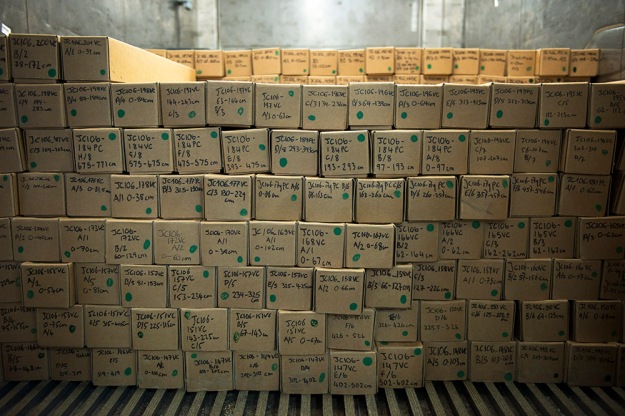 As we both write this, the 212th core has been recovered from the large moraine in outer Galway Bay. There is some 6 tonnes of mostly mud in our refrigerated container, and we have picked more than 100 shells for dating. But we know exactly where every kilo came from, what it looks like, and which ones we want to target for further research. When we get back on land, we can hit the ground running…..

Photography mostly by Alex Ingle, except where it isn’t….